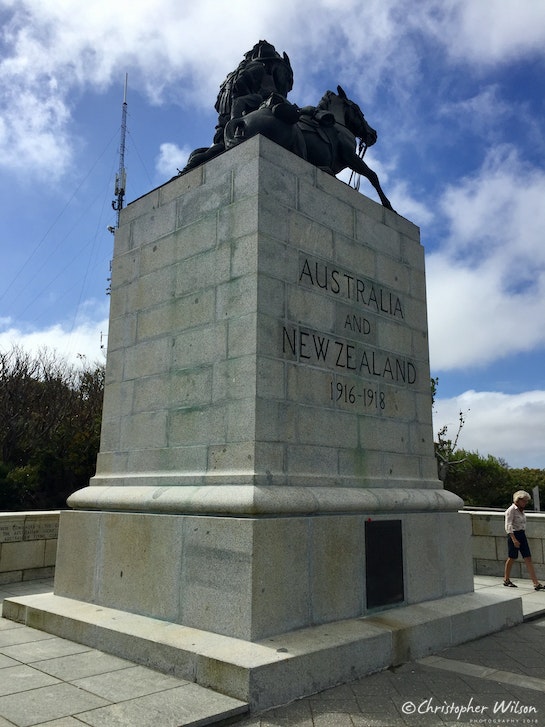 We headed off early to Albany arriving there around midday. We picked a caravan park to stay in but could not book in till around 2pm so did some minor sight seeing till then. We went out to a place called the gap and explored the national park. At the gap they have built a platform over one of the rocky inlets. You can walk out on it and watch the waves crash onto the rocks 50 metres below you. The rocks here are unusual and are related to the rock formations from Antartica. This part broke away millions of years ago, along with the rest of Australia. We explored all the other tourist sights in the park and then made our way to the caravan park. We checked into the park. It was one of the best caravan parks we have stayed in to date. Loverly green lawns to camp on, new and spotless facilities and not far from the beach and unlimited high speed wi fi. We stocked up our supplies and made plans for the next day. Next morning we had Clive into Nissan early for its 30,000 service. Yes we have done just over 10,000 Klms since leaving Broome two months ago.

To fill in time till 1pm when the car would be ready, we did a walk around town and took in all the sights. We visited a camping shop to check out some gear and I was able to buy some new walking boots as I had worn my existing ones out. We picked up Clive at 1pm and then drove up to the memorial park that houses the Anzac Memorial Museum. Before going to the museum we walked to the top lookout where there is a monument to the Desert Light Horse that left Albany for the 1st wWW in December 1914. (See photo above). The monument is the remains of the original monument built at Port Said to honour the regiment and its actions in WWI but was partially destroyed during the Suez Crisis in the late 1950’s. what was left of it was bought back to Australia and re erected at its present home and officially unveiled in 1964. The granite blocks came from Port Said but the bronze statue had to be recast using a carving of the original made by one of the soldiers. There is a large courtyard around the statue. This is the place of the first organised Anzac dawn service as it overlooks the harbour where the first two Anzac convoys gathered and set off for the Middle East in 1914.  Standing there I could imagine just how moving attending a dawn service here would be. Something we may put on our bucket list.

After walking around the lookout we headed down to the Anzac museum. It was just before 4pm and it closed to new entrants at 4 and then close the museum at 5.30. When we saw what was involved we decided to come back next morning early. This we did and it was a good decision as we spent over two hours there. A visit to this place should be on the list of anyone that visits WA.

When you first enter you are given the card of a soldier from Gallipoli that has a code on it. As you go around the museum you are able to follow that soldiers journey through the war. My soldier, Bugler Otto Siefken enlisted and was one of the first convoy to leave Albany. His father was German who was excluded from serving for Australia because of his birth, but Otto having been born here could serve. He fought in Gallipoli, landing with the first wave and survived only to be sent to the trenches in France. There he was captured in early 1917, and died in a POW camp four months before peace was declared in November 1917. How sad. Lest we forget.

The museum has the full story of Anzacs serving in the whole of WWI.  It is in Albany because that is where the first 2 convoys left from. The first included 30,000 Australian and New Zealand service men and members of the nursing corp. horses and supplies. it was escorted by several of the small Australian navy destroyers. The second convoy included 12,000 Anzac troops and it was un escorted. Part of the museum looks over the harbour and you can imagine just what it was like in 1914.

There is so much information in this museum, so brilliantly presented that you really need a full day, with breaks in between wandering the grounds to take it all in. But it was raining, so we called it a day after about 2 and a half hours but resolved we would visit it again when next in WA.

We left at about 11.30 and headed off to the Stirling Ranges which are about 120 kilometres north of Albany. We arrived and booked into the national park for two nights. In the afternoon we took a drive to Bluff Knoll the highest point in the park at 1054 metres above sea level, almost the same height as Blackheath. It snows here occasionally, just like at Blackheath. There is a car park about 400 metres from the summit and a walking trail to the top. When we got to the car park a storm closed in and fog and cloud billowed down the rocky crags towards us.  We decided to call it quits, took a few photos and headed back to camp. The camp ground was small but had flushing toilets, and at $14 a night for the two of us was good value. The first night there 8 other couples came in and used all the facilities, which includes free gas bbq’s but only one other group paid. Why  do people think that they can bludge on others. It gets my goat because if such non payment continues I can see future governments just banning camping in National Parks, then we all are the losers. A lot of free camping sites have been closed already because of the mess a few leave behind. Next day we did a self drive tour through the park exploring the huge range of flora on display. There is a huge variety of wild flowers scattered through the bush. We also came across a diamond python in the wild, and Louise gots some good photos, (from the safety of the car). Back at camp for lunch we had a quiet afternoon vegging out.

Next morning we headed off to  Bremer Bay for our next stop. We arrived there before lunch and and booked into another caravan park with lovely grass for two nights. We explored the surrounding area next day. The beaches along the southern coast of WA are simply stunning. White white sand and the water colours are unreal from a teal blue to turquoise. If you see a photo you would think the photographer had mucked up the colours as to us from the east it looks so unreal.  The only downside here is that the surf is dangerous. The waves that come in from the great southern ocean are unpredictable and seem to dump when they get in shore. We noticed many plaques on the rocks remembering the people who had drowned. Care is needed here when near the ocean.

Next morning it was off to Esperance some 400 Klms to the east. Again we booked into a caravan park. We stopped here mainly to stock up. We did a little exploring but nothing that we would really write home about. Next morning after going to the post office to pick up mail that has not arrived we headed off to Cape Arid National Park. I am writing this there but you will have to wait to next blog to read about the delights here.

The mail we tried to pick up was our postal voting papers for the by election in Barnaby’s seat. Yes he is our local member. We applied for the voting papers a week ago and were told we would have them by the 28th. Well today is the 30th and no mail. we were told at the post office that letters now take 7 to 10 working days to get to you. Gee that's progress. So I suppose now we will have to wAit till they try and fine us to point out we tried to vote but the system stopped us.

So tiLl next time.