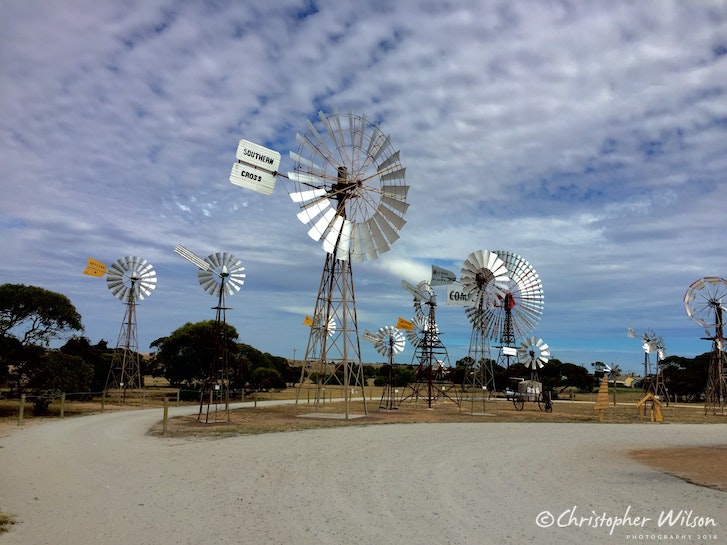 We had three nights in Cape Arid National Park which is situated some 90 Klms east of Esperance. This park is truely spectacular. On one side are massive wheat farms with 10,000 hectare plus paddocks and  on the other the sea. We arrived in the early afternoon to find that they were doing major pruning in the camp ground and we would not be able to set up camp to late afternoon. The volunteer camp hosts are people we first met in Perth, and again at our stay at Wellington National Park. They assured us that we would be able to set up that night so we adjourned to a place down near the beach for a relaxing afternoon of doing nothing, and writing the previous blog. At about five we were informed that we could go to the camp ground and choose a spot from one of the five that they had made ready. The camp spots are very private and once set up you are in a world of your own. Facilities include long drop toilets and two camp kitchens. The one near our camp had spectacular views down to the beach and ocean. Next morning we were up early and explored several beaches nearby. The colour of the water here is a light to dark turquoise and set against the whiter than white sand dunes, the scenes are amazing. So is the low Heath scrub, dotted throughout with tiny wild flowers. It is spectacular.

With some of the tracks being deep sand. The old ruins are now overgrown, but a daughter of the original settler had painted many scenes of the area when she lived there in the early 1900’s so you get a real sense of what it was like. Totally isolated now, so you can imagine what it was like then. The next day we did some further exploring closer to our camp, and took it a little bit easier as the previous day had been quite long and exhausting.

Our last morning at Cape Arid saw us up early, packed up, said our good byes to the camp hosted and set off to start our trip across the Nullarbor. We decided to take a track up to the highway to save driving all the way back to Esperance and then up to Norseman as we thought it would be quicker. Well we were wrong. The first part of the trip was Tarred road which then went to gravel but quickly turned to find the track through the trees. My first warning that this was a track seldom travelled, let alone maintained was when I noticed mature bushes growing in the pot holes. The further we went the worse it became till we were crawling along at 5klms an hour, being shaken to bits as we were in and our of large dried out bogs. Some had been filled with rock just to make it harder.. it was the worst road we have been on for this trip and made the worst of the Gibb River Road look like a pleasant Sunday drive. We got to the highway finally at 12.30pm. It had taken us about five hours to travel the 200 kilometres, where half was tar when we were doing 90 Klms an hour. That works out that we took 4 hours to travel about 80klms as well as using a lot a diesel. Oh well another talking point.

We arrived at the Balladonia Road House and filled up at $2.10 per litre and then set off to our next stop at Cocklebiddy . Driving across theGreat Australian Bight is not full of things to talk about except that we stopped and camped over night at Cocklebiddy and Nullarbor. We did stop at a couple of lookouts on the way to break the monotony of the trip, and the sights of the limestone cliffs are spectacular. But other than that there is not much to write home about. The main talking point is when you cross into South Australia you have to turn your clock forward bu 2 1/2 hours. It was interesting when we got up at Nullarbor at 9.30am, which was 7am WA time, the only people in the caravan park were people who had come for WA. The huge time adjustment really throws out your body clock and 4 days later we are still adjusting.

Our last stop across the Bight was at a small town called Penong. The caravan park here is delightfull and it was only a short walk up town to the pub where the beer was delicious and cold. Between the caravan park and the town is the results of a town project where they have a wind mill museum. They have restored and constructed some 20 windmills. The largest is one made by comet who had made the largest windmill in Australia. The townsfolk found one out in the bush brought the remains back to town, restored it to working order and rebuilt it. There were only 15 of these windmills ever made and this one is the centrepiece of the display. A photo of it heads up this blog. From Penong we took the road to Streaky Bay where we checked into a caravan park out of town. It is new and has the best facilities of any caravan park I have ever seen. The ablution block has 8 seperate private shower rooms that includes toilet, shower and full vanity. It has to be seen to be believed. We booked in for two nights, but as we set up camp with ideas of staying longer the wind came up and changed our minds. Every time we have camped next to a beach (except Cape Arid) there have been wind and gale warnings, and Streaky Bay was no exception.

We were going to explore the whole coast line of the Eyre Peninsula, but have now changed our plans as you will see in a moment.

The full day we spent at Streaky a Bay started with a coffee and cake at the local bakery, both delicious. We then did a self drive tour around the area which included visiting a lookout over a permanent sea lion colony. Back at camp the 50 Klms plus winds drove us into the camp kitchen to cook and eat.

This morning we were up early for SA time and got away at 9.30 for our next stop which is the Gawler Ranges. We are going to spend 2 or 3 nights here in the wilderness. We have set up camp in one of the remote campgrounds. We are the only people here so we are guaranteed some peace and quiet. There is no phone signal either so hope to be able to update the blog when we do some exploring tomorrow.

Well relying on a telephone signal from the ranger station did not work. Today we took a drive through the park on their 4WD tracks. We had the whole park to ourselves, until near the end of the drive we came across another vehicle. The scenery is stunning but with the temperatures hotting up we will be leaving tomorrow morning and heading down to Port Lincoln.