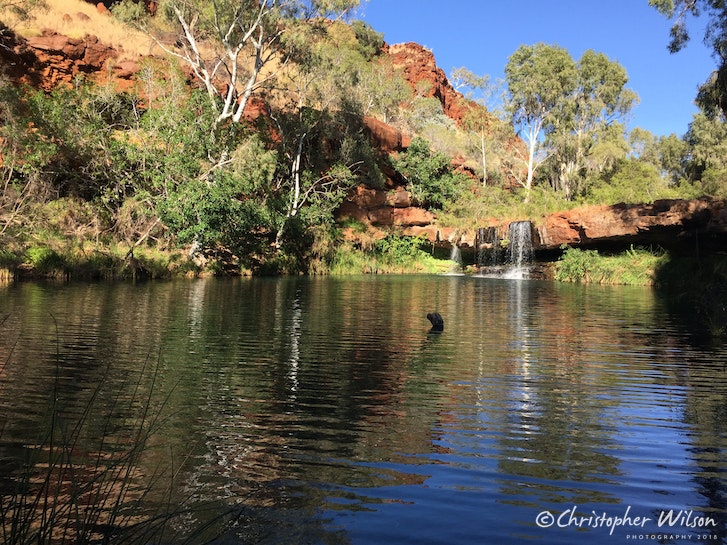 The drive from Newman to Karijini was pretty straight forward, arriving at around lunchtime.  The country side is indeed beautiful with rolling plains of spinefix and trees giving away to mountain outcrops. This part of the Pilbara is the home to about the 20 highest peaks in WA.

The camping area at Karijini is manned by volunteers as it is school holidays and generally the park is full. Arriving early was to our advantage as we were allocated a loverly spot for 3 nights camping. After lunch and setting up, we headed off for one of the walks around the top Dales Gorge, taking in the magnificent sights. I have uploaded some photos onto my photography web site. The views are indeed stunning. As the sun set we found our way back to our camp site for dinner and an early night as we were going to walk Dales Gorge next morning. It is a class 4 walk meaning it has the 2nd hardest rating of bush walks.

As the sun set it became quite cool and the temperature dropped to below 20 degrees, the lowest in early evening we have had since we left Alice Springs. We must have acclimatised to the warmer weather as we rushed to get jeans and jumpers on. And we needed blankets on our bed the first time in 6 weeks.

We were up early next morning, commenting on the coolness and got ready for our walk. Let me say the walk through the Gorge was stunning, and a very memorable experience. It started with going down a steel staircase down about 70 metres or more. Once on the Gorge floor we did a slight detour to the fern pool. The photo heads this blog. It was a magical place with only two other couples there and no boisterous back packers to spoil the atmosphere. It is spring fed with a small waterfall and large pool. It is a sacred spot to the original inhabitants, and spending 30 minutes here soaking it all in you can see why.

We finally tore ourselves away and slowly meandered through the Gorge taking about 200 photos. It was simply stunning. The green and gold against the deep red of the iron rich soil.  In one of the photos you will notice a warning sign about asbestos. It is in the rock that surrounds the Gorge in small quantities.

We went to the other end of the gorge where there is another pool, the circular pool. While beautiful it was full of backpackers, noisy, ignoring all the warnings and generally making the place unpleasant. They have a habit of ignoring all the rules, making it sometimes very unpleasant for the others.

We climbed out of the Gorge using the other exit which is a very steep rocky climb. The leg muscles were hurting when we got to the top.

Being worn out after our excursion we had a relaxing afternoon getting energy for the gorges we would walk next day at the other end of the park.

Next morning we headed off to the other end of the park. The first Gorge we stopped at was Kalmina Gorge. We descended into it. It also is spring fed so there is still water in the bottom of the gorge despite being the dry season. This also was a stunning walk with many photos again being taken. After we climbed out of the gorge we headed off to see Joffre Falls. Would love to see these falls when there was a full body of water going down them. It is a long drop and would be spectacular. We then headed off to Weano Gorge. When we got there about lunch time the car park was full. We did a walk to the top of the gorge and looked down to the bottom 100 metres below at a place where three gorges meet. Spectacular. There was a Celtic Cross just near the lookout that was a shrine to remember the life of a SES worker who drowned while saving others in the canyon after a heavy downpour. A telling reminder of the dangers of going into gorges, and also to the bravery of rescue workers risking their lives when others take unnecessary risks and don't follow the warnings.  We looked into Weano Gorge and the rough rocky descent, and the huge number of people in it and decided to give it a miss. Too many people to get any descent photos. We headed over to Hancock Gorge and had a look at its entrance. It is a class 5 walk.. the hardest. With the state of my knees we gave that a miss as well. We will do the Hamersley Gorge when we head off to Chichester Millstream National Park in a couple of days.

On the way back to camp we did a detour to a lookout that gave views of one of Rio Tinto mines. Somehow the WA government redefined the boundaries of Karijini in the 90’s to allow Rio Tinto to mine in the middle of the park. One thing we noticed that in the gorges of Karijini the rocks you walk on is in fact iron ore. If it is loose it rings if you knock it against another rock just like a steel slab. I hope the Rio Tinto precedent is not repeated. This park is a very special place and it's gorges in my opinion surpass those that we saw in the Kimberley's.

This morning we were up and headed into Tom Price to restock some supplies before heading off to Millstream. Our intention was to only shop in Tom Price. Having got here the call of a fresh hot shower was too much, after a 4 day break from them, and we checked into the local caravan park at the base of Mount Nameless. The amount of red dust that came off me in the shower had to be seen to be believed. Today will be a relaxing afternoon, and then tomorrow we will be on the road again.