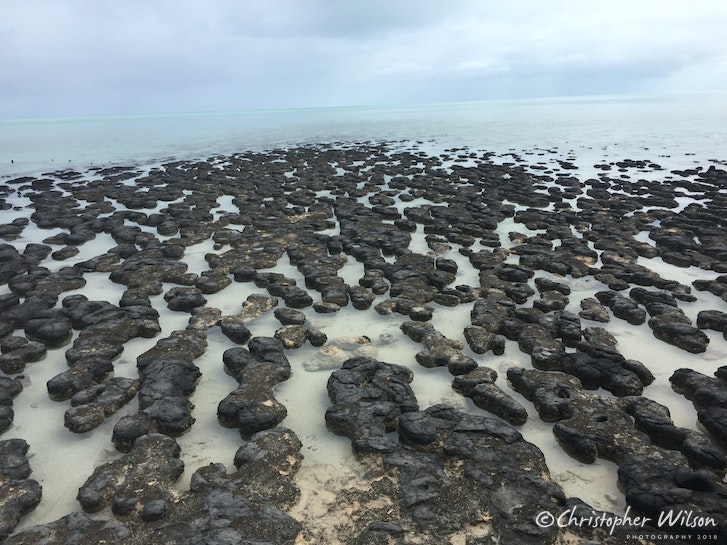 As mentioned in our last post we travelled up to Quobba next morning to see the blow holes and the HMAS Sydney Memorial Cain. It was a 50 Klms easy drive. We had planned to camp at Quobba one night, but we were so comfortable at Carnarvon decide to stay there for the extra night and do a day trip to Quobba. What a great decision. When the wind is not blowing it would be a nice place but the day we were there the wind was strong enough to blow your dog off its chain…. Assuming you had a dog. Being low tide we thought we would miss the blow holes but the opposite is true. They are at their best at low tide. There a couple of shots in the gallery. More interesting from a photographic point of view was the raging ocean smashing onto the rocks. Spectacular.  On the way back we suddenly noticed a huge display of wild flowers beside the road. They were not open on the way out but the sun had done its job and they were displaying their beauty. There is a photo in the gallery.

After about a hour  of shooting the blow holes we headed up to the memorial which was 12 Klms away on a corrugated road. The Cain was built in 1980 by the members of the Naval Association before the remains of the boat was found, which was in 2005. The spot for the Cain was chosen as it was about half way between where 2 boats from the German boat beached. All were lost on the Sydney, and the Germans lost about 86 of their crew. After the the Sydney was found an inquest was held and the findings are interesting reading. It can be read on a navy website if you are interested in the history.

Back in Carnarvon we bought some vegetables from a road side stall of one of the big irrigation producers in the area. His tomatoes are to die for, so full of  flavour. As well we solved another problem, that of our refrigeration capacity. We just didn't have enough, and we were having to restock every 3 or 4 days, which limited a bit on what we could do. So a visit to the local camping store saw us purchasing an Engel 40 litre fridge freezer to use as a full time freezer. The price was the same as what I would pay in Sydney so we didn't have second thoughts. The first thing to go in it was a box of magnums from Woolies. Ice cream on the road yum.

The other fridge freezer we have is a 55 litre evakool, and we will use that solely as a fridge. We now have plenty of space for keeping food cool or frozen, which frees up what we can do. As well we have a back up system if something goes wrong.

Stocked  up we headed off on Saturday morning to Kennedy National Park, some 170 Klms inland from Carnarvon. The national park sits in the middle of the driest plains you could imagine. Everything is either dead or wilting. What's makes the park interesting is that it encompasses a huge Messa. The top is what the level of the surrounding country side was before it was all eroded away after being pushed up from the bottom of the ocean many many millions of years ago. It is hot and very dry. No water or signs of water at all. It is an unforgiving landscape and very hot.

On the way out we crossed the Glascoyne River. It is a dry river at this time of the year, full of sand and also the longest river in WA. When dry the water runs under the sand. In the wet season the flows are huge and there are photos of the river in flood some 25 metres deep and about 500 metres wide. In fact the town of Glascoyne Junction was wiped out in the floods of 2002 and has been rebuilt. All nice new and shiny now. Further up the dirt road just before the National Park we came across a cobbled road. It was built in the 20’s  and 30’s during the depression when motorised transport was starting to be used to move wool and other supplies about. Prior to that camel and bullock wagons were the main means of moving goods about. In fact the road we were on was used by Charles Kingsford Smith for his mail run. The money he earns here provided the capital to fund his later flying adventures. Some of the stories and photos on the information panels show just what a hash and isolated life these pioneers had.

We rested after we arrived and walked a couple of the gorges next morning when it was comparatively cooler. They are stunning, but very revealing of this fractured, dry and fragile landscape. Because there is no water there is very little wild life here, except for small marsupials who hide amounts the rocks during the day and come out at night. We noticed that a couple of the wild shrubs have adapted their leaves to capture the night dew and so survive without rain.

I have posted photos in the wa  low res images gallery which will give you some idea of what the country side is like, and the blow holes etc.

Tomorrow we were going to love off to Mt Augustus, but given the heat and the 450 Klms round journey we have decided to leave that till next time. So will head off across the back roads to Hamelin, the Shark Bay (Monkey Mia) and the Francois Peron National Park.

We have had this camp ground all to ourselves today, but just now some backpackers have pulled up and set up camp almost next to us. This camp ground is so large they could pick anywhere they liked and would never be able to see us or let alone hear us. But no right next to us in full sight and we can hear everything they say. They must like living on top of themselves in Europe or they are scared of the dark. With no moon and no lights it is pitch black at night out here. Oh well.

We were up very early next morning as the winds blew all night keeping us awake. By early morning they had stopped, but we had breakfast and packed up, visiting the Honeycomb Gorge before we left. As we headed back to Glascoyne Junction it started to sprinkle. We took a back road which had just been graded and as we progressed the clouds got thicker and the sprinkles turned to intermittent light rain. Roads are closed here very quickly when it starts to rain and fines for driving on them when closed are pretty steep. Luckily the hadn't shut the gate (yes there are gates on the back roads here)  Anyway the road we took was in good condition as I said and we made good time on our way to Shark Bay.

A check on Wikki Camps led us to choose a farm stay for one night at Hamelin Outback Station Stay. It is an ex sheep Station purchased by Bush Heritage Australia in 2015. It is a 202,000 hectare property. We are very glad we did, as the amenities are excellent, so much so we stayed an extra night so we could explore the surrounding area.

Today we went to Hamelin just down the road and viewed the oldest living organism on the planet, the stromatolites. These organisms date back 2 billion years and are the mechanism that produced oxygen on our planet. The stromatolites here is the largest remaining collection in the world, making them very special and part of the reason it is a world heritage area. The landscape and seascape is truely amazing. The colour of the water has to be seen to be believed and no photos can really do it justice. Although while in Denham today we saw a photo exhibition of aerial photos taken by some very famous Australian photographers that go close.

On the way to Denham we stopped in at Shell Beach. This beach is made up of cockle shells that survive in the very salty Hamelin Bay. It is an amazing place to walk on millions if not billions of shells that have accumulated over 1000’s of years. Makes you feel very humble that we are only small specs in the time line of earths history.

Our reconnoiter of the surrounds has led to us deciding to move on tomorrow to Francois Peron national park, and do some bush camping at the top end of the peninsula. To get there we will need to do some pretty serious 4 wheel driving on sand tracks, so should be fun. We will be up there for two to three days before we head off to Kalbarri.