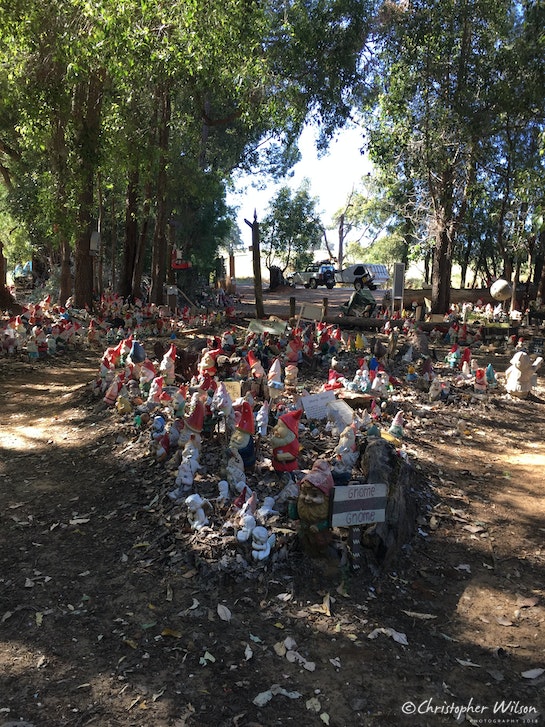 We left Dryandra after what was a fabulous 3 days and headed off to Wave Rock. We stopped along the way at Narrogin and stocked up before heading off towards Hyden. Some research on WickiCamps led to the decision to camp not at Wave Rock but at a small place some 18 Klms away at a place called Karlgarin. There is a Caravan Park there, Tessys, which had very good write ups so we booked in for  3 nights. Booking in the owner asked what we were interested in. When we told him he pulled out a map and ran us through all what the area offered and

not marked on the maps. So next day we were up early and headed off to Wave Rock. Well the photos you see on brochures make it look bigger than what it really is, and we both found it a bit under whelming. We did a walk to the top of the granite outcrop which made the trip more worthwhile as the views over the surrounding farming land were spectacular.. so we're the wild flowers growing in little nooks and crannies. We also came across some small lizards about 20 cms long with bobbing heads to attract other hiding in the rocks.  Which was fascinating. After wave Rock we drove out to Bates Cave where there were aboriginal stencils dating over many centuries. Back to camp we had an early night after all the walking and climbing. Next day we drove a recommend loop to see the other sights of the area. One was Buckley's Breakaways which are similar but smaller the the Breakaways we had seen in South Australia at Coober Pedy. What was good about these was that you could walk through them.

Next morning we were up early, packed up and headed off to Perth via York. We wanted to visit a 4x4 show that was being held on the weekend to try and sort out our solar power issues. York is a little historic town about 90 Klms east of Perth and was one of the first European settlements in the state. We decided also to go back to Northam so stayed there for the night before heading to South to Perth on Saturday morning.

After checking into the caravan park we headed off to the shopping centre. I had twisted my glasses accidentally so needed to visit OPSM to have them straightened out. Sunday morning we were up early and headed off to the 4WD show. After speaking to the manufacturer of our trailer we bought a Korr 150 watt solar blanket. We got it a a special show price that was about $300 off. Since its purchase we have had no issues in charging up our batteries, so money well spent as it means we don't have to pay for powered camping sites every couple of days.

Sunday was a very hot day with the mercury climbing to 38 degrees, so once we had seen and done what we needed to do we headed back to camp for a restful afternoon and the planning of the next phase of the trip.

Up early again next morning we headed off to Bunbury where we restocked before heading to Wellington National Park. We found a great camping spot near the lake and set up camp for 2 nights. The next day we drove around looking at all the sites, including the dam, giant Jarrah tree, as well as visiting Collie, a coal mining town.

We left Wellington next morning and headed off to Margaret River. The drive through the country side was fascinating. Rolling hills of pasture give way to forests of Jarrah, kauri and other trees. Every turn brings a new and picturesque vista, and photos you take don't do it justice. Driving through one forest we came to a roundabout in the middle of no where and there on the side of the road were hundreds of gnomes. We stopped to have a look and discovered that instead of hundreds there were thousands.  The story behind it is more fascinating. It appears about 20 years ago council decided to put in a roundabout at the intersection where there was a bus stop. A mother was worried that the school children would wait for the bus at the wrong place and put a gnome in the base of a tree that had been cut down for the roundabout construction so the kids would know where to wait for the bus. Other gnomes started to appear and as the collection got larger locals were pressed into service to look after the area. It became such a tourist attraction that council eventually took over its maintenance and the site continues to grow as people add gnomes in memory of loved ones who have died.

We did some research of caravan parks in the Margaret River region and non of them had good reports and most were very pricy… $35 to $50 a night. So we opted to stay just out of the area in a Conservation Reserve at Canebrake Pool. What a great decision. It was quiet and magical with only 9 camping spots and only $12 pn… pensioner rates. So we booked in for 3 nights. We were going to stay 6 but saw everything we wanted to see in 2 days. The first day we did the northern region, Including dropping in to Vasse Felix winery. It was the first in the Margaret River region.  However it was not the experience we were looking for. The wineries here are more up market and commercial then the Hunter Valley, and the whole Margaret River is so Southern Highlands, but more so. So we stuck to the natural sights of which there are many.  On the Second day we did the southern region. There are caves and light houses to explore, if you have the money, but we preferred to take in all the natural sights, beaches, forests and old towns. We visited Augusta which was a real treat especially Augusta Golf Course. A nine hole par 3 course with sand greens and a big sign at the entrance about the Masters and another saying “No shooting or hunting”. We had morning tea at a place called Flinders Bay. It is the sight of the largest whale rescue in the world which happened in the late 1980’s. over 90 false killer whales had beached and over 90 were saved by a huge human effort. Plaques along the foreshore record the events. We drove along Caves Road back to camp and were Astounded by the groves of Kauri forests along the way. These truely are majestic trees and we will see more of them in the days to come as we journey towards Albany.

On our last night at Canebrake, we decided to roast a chook as we could have fires and national parks had supplied fire wood. It was our first attempt to roast using the camp oven. While it was a bit of hit and miss ( the thermometer we bought for the event wouldn't work) we winged it and I must say the end result was fantastic. A $7.00 a chook will do us for one dinner and two or three lunches… now that is what I call value. (Anyone would think I'm a pensioner)

Today we packed up and headed out to the next section of our trip… the great southern forests.

Hopefully the next blog will be sooner than two weeks. But we are having so much fun not working to any timetable. I am writing this at our next camp just South of Pemberton and will post it in the morning when we go into Manjimup where there will be a farmers market.